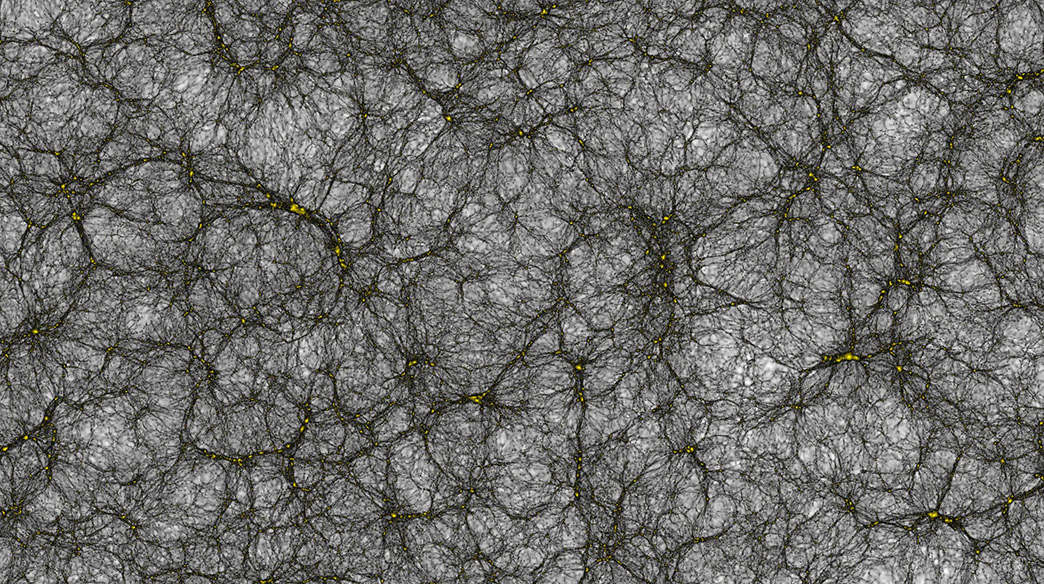 For the first time, scientists have succeeded in carrying out a cosmological simulation with several trillion particles. The simulation on the CSCS supercomputer Piz Daint provides an important basis for researching the universe with the Euclid satellite, which will be launched into space in 2020.

The universe is a cradle of the unknown. Twenty-three per cent of it is made up of dark matter, while 72 percent is dark energy, the source and composition of which remains an unsolved mystery for science. Dark energy is thought to influence the formation of structures in the cosmos and cause the universe to expand at an ever-increasing rate. The Euclid satellite is set to lift off into space in 2020 and gather data over a period of around six years. New ground-breaking simulations by astrophysicists at the Center for Theoretical Astrophysics and Cosmology at the University of Zurich carried out on the Piz Daint supercomputer at Switzerland’s National Supercomputing Centre (CSCS) will provide an important basis for the mission. The objective is to research the development of the universe over the past 10 billion years, uncover the source of dark energy and find out why it is accelerating the expansion of the universe.

Based on the findings from the simulation of two trillion (1012) particles on the Piz Daint supercomputer, a theoretical but realistic galaxy catalogue will be created with around 25 billion galaxies from the universe. This will initially be used to calibrate what the satellite should focus on and measure. As soon as the satellite is active in space, the simulations will be supplemented with additional simulations. The results of the simulations gathered will then be compared against the data measured by the satellite in order to shed light on the sources, composition and effects of the universe’s “dark” components.

To perform the simulations, the astrophysicists at the University of Zurich spent three years revising a code (PKDGRAV3) that now simulates the surroundings of dark matter – known as halos – in a very precise manner. The halos reflect the clusters of dark matter, the density of which decreases outwards from the centre of a galaxy. At the same time, depending on the galaxy, the mass density of the dark matter is 10 to 20 times higher than that of the stars and gases in the galaxy belonging to the halo. In their paper recently published in Computational Astrophysics and Cosmology, the researchers explain that the important factors are high precision in the gravity calculation, a high degree of accuracy in the different time steps in the simulation and keeping the statistical errors below 1 per cent.

The aim of Joachim Stadel, Douglas Potter and Romain Teyssier was to simulate trillions of particles within a useful timescale that facilitate the creation of the galaxy catalogue necessary for the project. According to the researchers, the code had to be optimised in detail and adjusted for this purpose in such a way as to exploit memory and computing processors in the best possible way. And they succeeded: in just 80 hours, which the researchers say is the fastest time-to-solution simulation with such a high number of particles, the astrophysicists used Piz Daint to simulate halos of the dark matter from one tenth of the Milky Way mass. Using another computer model, the researchers in the Euclid consortium then calculated, purely statistically, the galaxies that should be located in the halos.

Simulation as a basis for calibration
“Euclid will make a kind of topography of the universe from the dark ages, when the first stars and structures began to form in the universe around 400 million years after the Big Bang, right up to the present day”, explains Joachim Stadel. The galaxy catalogue created will be used beforehand to optimise the observation strategy of the satellite and quantify any sources of error. He explains that the primary function of the present highly precise and large simulations is to calibrate the entire “Euclid pipeline” because one problem is that the processes taking place after the dark period are no longer linear. “When we receive the measurement data, we have to be able to use the simulations to understand the non-linear effects and adjust the parameters accordingly.”

On very large length scales, the universe appears homogeneous, but the smaller the scales, the more inhomogeneous the universe is, and the processes taking place are no longer linear. Both galaxies and dark matter clump together. This creates fluctuations in the density of the matter. In general, Stadel emphasises that the fluctuations of the mass density react very sensitively to the parameters of the fundamental physics of dark matter and dark energy. As a result, simulations are the only way to create this connection.

Researchers use weak lensing to measure the material density, and through this also the percentage of dark matter. Weak lensing is the very subtle distortion of the light from background galaxies through the fluctuations in mass density, mainly of dark matter, taking place in the foreground,. “It is comparable with the distortion you would see through a glass pane that is not quite even”, Stadel says. The notion that mass can affect light in the same way as a lens (gravitational lensing) was one of the predictions made by Albert Einstein in his Theory of General Relativity. As Stadel explains, it is very difficult to determine this distortion in the picture of the galaxies with high precision. However, this is essential in order to determine the fundamental properties of dark matter and dark energy, which is why Euclid has to observe lots of galaxies across large areas of the sky.

In addition to weak lensing, Euclid also uses the effect of what is known as galaxy clustering. The new simulations conducted by the researchers at the University of Zurich will also be used for this method. As Stadel explains, however, these measurements are less direct and based on more assumptions.

Beginning of a paradigm shift

Besides the simulation on Piz Daint, the researchers also tested their new code on the US supercomputer Titan at Oak Ridge National Laboratory in Oak Ridge, Tennessee. Like Piz Daint, the system is a hybrid supercomputer with graphics processors (GPUs) and traditional processors (CPUs) but is more powerful at the time of simulation. Here, the researchers succeeded in getting the newly revised code for the simulation of no less than eight trillion particles to run on up to 18,000 compute nodes with a peak performance of 10 Petaflops. For the scientists at the University of Zurich, the new simulation means the beginning of a paradigm shift in the field of simulations. In another decade, they expect to be able to carry out simulations like this in eight hours or less instead of in 80. It will then no longer be possible to store data and process it later. Stadel and his colleagues believe that analysis instruments would have to practically be installed in the code and used on the fly. Image (copyright Joachim Stadel 2017): A small piece of the Simulation showing the complex formed by the dark matter through the action of gravity and the expansion of the Universe. White regions are the voids and the golden concentrations are the halos, where the density of dark matter is the lowest and highest respectively. These two extremes are delineated and connected by the filaments which are shown here in black. The golden colored dark matter halos host the galaxies in our Universe. The image measures 2.5 billion light years across and our entire Milky Way Galaxy would fit inside of a single golden colored pixel.

Image (copyright Joachim Stadel 2017): A slice through the invisible universe of dark matter is shown here extending from the present, located at the centre, to the most distant regions observable by the Euclid satellite, 10 billion light years to the left and right. The mission of Euclid will be to indirectly measure this network-like structure through the effect of gravitational lensing. Since light will have taken 10 billion years to travel from the left and right sides of the image to “us” in the center, we see that the Universe in the past looked considerably smoother, and that the large empty regions, known as voids, are much more prominent at the present.

MassiveFIRE: Cosmological simulations of massive galaxies in the Young UniverseAutomatic identification of states from time series